Kale and Mushrooms with Creamy Polenta 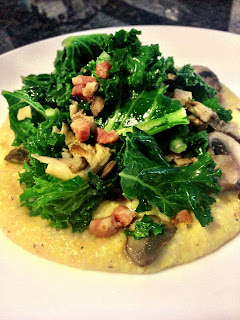 I will admit, I have not been the best blogger lately. Our lives have been so busy and sometimes unpredictable lately that I have been experimenting less in the kitchen. That said, I have made quite a few new and very delicious meals, but for some reason I forget to take pictures before we devour the food, or I have not dubbed the dish "blog worthy" - that is, until this meal.

When I first saw this recipe, I knew immediately that I needed to make it. For some reason, I have never prepared polenta at home before, but after my first experience making it for this dish, it sure to make more appearances in different dishes around here! It is so easy, and so delicious! Granted, I sort of cheated and used pre-prepared polenta from the grocery store, but I do know that it is also simple to make from scratch. Whatever suits you, it will work for this dish.

I got the idea for this dish from Epicurious, which you can view here, but sometimes I find that their recipes include too many redundant steps, so I simplified it to suit the 20 minutes I had to make dinner. First, I took 24oz of precooked polenta, broke it into pieces, and heated it in a medium sauce pan with approximately 2 cups of chicken broth, not only to heat it, but to soften it. Once the polenta dissolved into the broth, I added about a half cup of shredded parmesan and allowed it to melt while stirring. I removed the polenta from heat and added about a fourth cup of half and half to make the polenta creamy. It smelled amazing! Meanwhile, I sautéed 4 ounces of diced pancetta. Once it was done, I added 8 ounces of sliced specialty mushrooms (including baby bella and shiitake mushrooms), 3 cloves of diced garlic, and a few large handfuls of kale (previously washed, separated from the stalk, and broken into bite sized pieces). I continuously tossed this mixture while it sautéed for about 6 minutes, until the mushrooms were cooked and the kale was bright green. Then, I served this mixture on top of the polenta. Given the simplicity of this dish, it is one of the best tasting meals ever! The creamy polenta serves as a great base for each bite. The mushrooms bring wonderful earthy flavors that pair perfectly with the salty pancetta. The crunchy kale provides a perfect contrast to the texture of the polenta. It was an incredible meal and was perfect for an impromptu date night! Enjoy!
Posted by Suzi at 8:38 PM 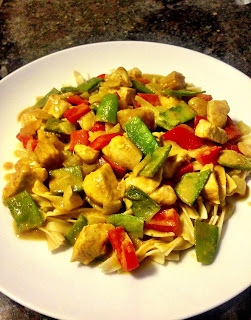 Recently, Bryan and I were able to get away for a long weekend and we visited Toronto, Ontario, Canada! It was an amazing experience, and we both agreed that we will definitely go back for future weekend getaways!

Toronto is a quick 4 and a half hour drive from Cleveland, and the route goes straight through Niagara Falls. We were happy to have a leisurely lunch and take some fun photos of the falls! It was absolutely beautiful! 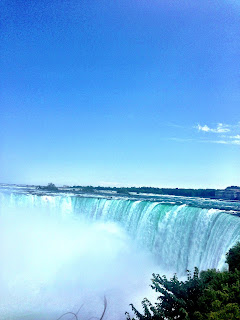 Toronto is located on Lake Ontario and has a stunning skyline! The spier tower is called the CN Tower, and it is the tallest single standing structure in North America. We were able to take an elevator to the lookout deck, and the views were stunning! 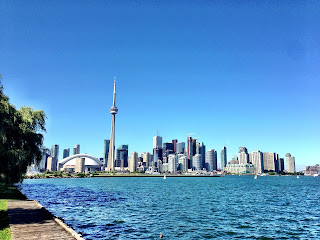 The city is also very international, with English and French as the dominant languages, but we also heard a lot of Asian languages being spoken that we couldn't distinguish. I was so excited to eat a lot of great Asian food while there, and we found some great restaurants that we thoroughly enjoyed!

At Khao San Road, we shared a Yellow Curry dish with shrimp as well as a Pad Thai dish. Both were absolutely incredible! At Momofuku, we had delicious ramen in two forms: the Momofuku ramen and veggie ramen, both of which were delicious!

After returning home, I craved yellow curry like no other! I've experimented a fair amount making curry dishes in the past, using red curry paste, so I sought out to try a new recipe using yellow curry paste. To make this dish, I simply whisked together a can of light coconut milk and a few tablespoons of yellow curry paste in a bowl. At this time, I also cooked some egg noodles in a separate pot. When they were done, I drained them and set them aside. Meanwhile, I sautéed diced chicken breast in olive oil until it was almost done. Then, I added minced garlic, diced yellow onion, diced red bell pepper, and sliced pea pods. After a few minutes, I poured the coconut milk and curry mixture over the sautéing chicken and veggies until the chicken was done and the vegetables were slightly cooked. I served the curry mixture on top of the noodles for a complete dish. It was delicious and definitely satisfied my yellow curry craving! Bryan really enjoyed the dish as well! Obviously, the chicken could be removed to make the dish vegetarian. Also, a variety of other mix-ins could be added or substituted like potato, cauliflower, or chick peas. I do not like that pictures of yellow colored food always appear more yellow than they actually are - but I figured that the recipe was worth sharing, regardless if the picture looked too yellow. Enjoy yellow food and get your carotenoids!
Posted by Suzi at 8:11 PM