I’m from Rapid City, SD – a small town with a population of about 100,000. Currently, I live in downtown Chicago – a city of about 3 million people in the city and about 10 million people in Chicagoland (which is just a fancy name for the whole city including the suburbs). It’s a pretty big contrast. Good thing I learned how to parallel park in college. Nope, they don’t require that skill in SD. Traffic is awful in Chicago and I have had to experience a little too much of that! Now that I live downtown, my driving stress level has decreased to almost nothing since I can walk practically everywhere I need to go. Now that I’m used to living in a large city, I have found that I quite enjoy the city life. There is always something going on, friends to hang out with, fun things to do, new restaurants to try, and new adventures around every corner.

I’ve taken up running as a new hobby. It feels so great to be in shape again! Well… getting in shape at least. I run downtown, on Wacker drive, by the river, and north and south along the lake shore. It’s fun and interesting to explore the city on foot! Here is the general area where I run: 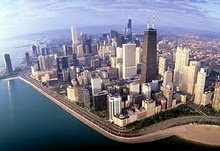 Cooking is my other recent hobby. I love creating new dishes with fresh ingredients. I’ve recently been introduced to some great food blogs where I think I’ll be spending a lot of my time. I love most anything about food in general. I am an amateur coffee snob, and a recreational wine-o.
Posted by Suzi at 7:38 PM