Yesterday was the big race! It was a beautiful crisp fall day. The temperature was 28 degrees and there were almost no clouds in the sky. The route, in my opinion was a little boring race-wise, but it was very pretty. We went down south along the lake for about 4.5 miles and turned around to see a great view of the city skyline from the south, and ran straight back. There were so many people!!! I can't find an exact report of how many people registered, but I heard that it was around 30,000 people for the 5K and the 15K total. I had a really hard time starting out because there were so many people. I had to do a lot of zig zagging, and even then, I couldn't really get into my pace. Finally around about mile 4, I was able to get into the groove a bit more, but the path was still pretty crowded. I felt my legs getting tired around mile 7, but it was great to be able to push through it and keep running faster and faster. I really tried to push myself this race, and it felt great! I'm pleased to say that I did not walk during the race, which is a great mark in training for me. I ended up with a finishing time just two minutes more than what my goal was, but when I figure in how I had such a hard time starting out, I think that I actually did run really well. Next time, I'll start farther up in the heats so that I don't get stuck behind so many people. I'm really excited to find another race to run! 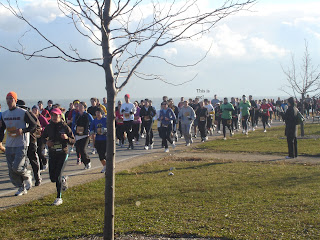 Bryan bikes around the courses of races to see me, and this is the first time we saw each other! He tried to meet me at miles one and three, but I had already past those spots! Thanks to technology, we can text locations to each other so we're sure to find each other in such large crowds. Once he realized he was a bit behind, he jumped up to mile 5.5 and saw me on this relatively open patch after we had already turned to come back. I typed in "This is me!" above my head. 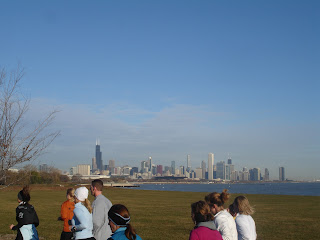 Here is the view of the city from the south. Bryan gave me great words of encouragement, and he headed back north to catch me at the finish line! 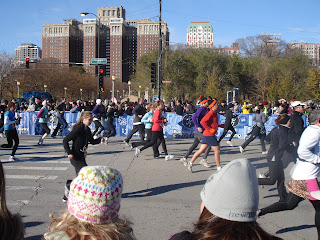 Here I am, the finish is right ahead, and I'm determined to end strong! 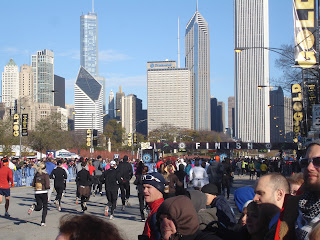