Guess what we got for our anniversary? A pasta attachment for our Kitchen Aid! We were super excited to try it out, and yesterday we finally had time. I was a little nervous, having never made pasta from scratch before, but it turned out amazingly well! The apparatus comes with various recipes and we thought light wheat would be a good start. It turns out, making pasta is actually pretty easy, once you figure out the logistics! Although, not every piece came out perfectly. We learned that the pieces that are going to be put through the flattener can't be too thick otherwise it will try to push too much dough through at once and it might come out with weak spots or even holes. Another thing to keep in mind is to lay the flattened noodles out separately. We didn't, and it wasn't really a problem until we got to the bottom of our pile and they were sticking together a bit. Also, once you put the flattened dough through the cutter device, put it directly into the boiling water even though you will be continuing to add noodles. We discovered on batch two that it doesn't really matter that all noodles don't go into the pot directly at once, as long as they get in there as soon as possible.

Honestly, for our first time making pasta, I'd say we had a major success with barely any trouble! And it was a lot of fun! 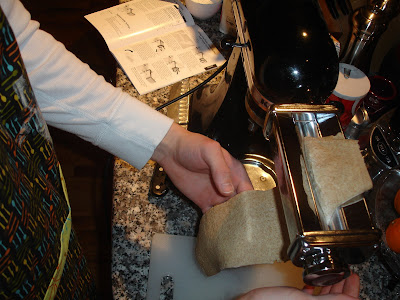 Flattened noodles prior to being cut into fettucini 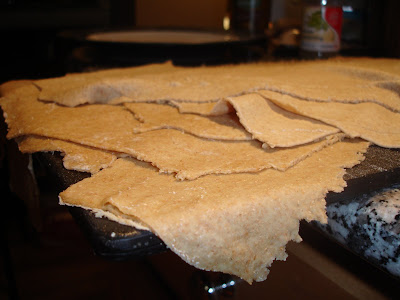 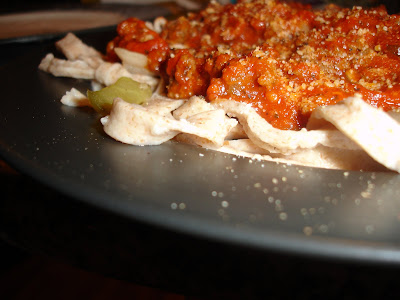 We made a simple pasta dish of baby portobello mushrooms, green peppers, onions, garlic and beef along with a hot pepper marinara sauce topped with grated parmesan on top of our freshly made fettucini. The noodles were so incredibly delicious! They tasted so much better than dried pasta that you buy at the grocery store!! We're definitely going to be making our own pasta from now on!!!
Posted by Suzi at 5:40 PM