As I mentioned before, Bryan and I had tickets for this concert since last October! We bought them for our anniversary/birthdays/Bryan's-almost-done-with-3rd-year/because-we-just-had-to. We splurged, and it was so incredibly worth it! 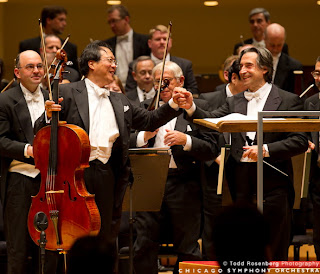 I had never seen Yo-Yo Ma before, so I was super pumped! He played the Schumann Cello Concerto, which is probably my favorite cello concerto, or at least tied for favorite with Dvorak. Even back in October, this concert was almost sold out, but our seats ended up being pretty awesome. We were 5th row back on the left side of the floor and could see him perfectly. It was really great!
Posted by Suzi at 1:36 PM