Monday (Day 6) was brick laying day!! Our gravel, sand and bricks were delivered in the afternoon and we got going quickly. We were expecting them to be delivered first thing in the morning, but they didn't come until about 3pm - so we knew it was going to be a late night of outdoor work because we couldn't stop anywhere in the middle and let anything but bricks lay out overnight. That also explains my lack of photo documentation of that part...

We laid 2 inches of gravel first as our base. Then we laid 2 inches of sand. We had to be quite detailed to keep it even and level, which was so tricky with sand. Next, we were ready to lay our bricks! We used the herringbone pattern and got to work! Let me tell you, this part was the easiest and most fun part of the whole project! We could actually see our progress and we seemed to be working pretty fast! The hardest part was transporting bricks from the pallet over to the patio. After a few hours of brick laying, we were finished!! Who knew that in 6 hours our hole would turn into a patio!! Since it was 9pm, we decided to clean up the yard and call it a night. 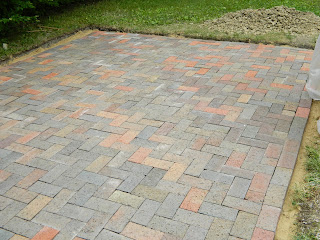 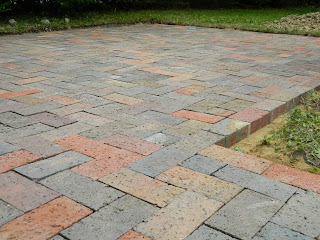 That, my friends, is one beautiful patio. It consists of 848 brick pavers, each laid by Bryan and me and we are so proud of our handiwork!

Tuesday (Day 7) Bryan laid the border around the bricks to keep them in place. 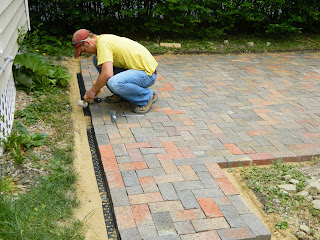 Next up was to brush sand into the cracks and tamp it down so that it's packed evenly. 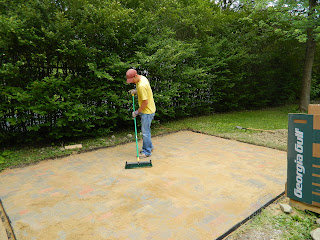 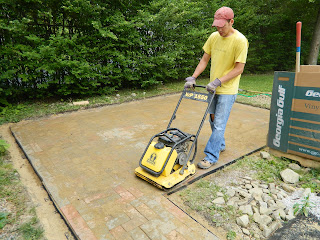 Today (Day 8), after a delay with a broken tamper, we've got it fixed and are up and running again. We filled gaps with sand and tamped 3 times to make sure all the cracks were filled properly. We cleaned it off and filled the edges in with top soil. 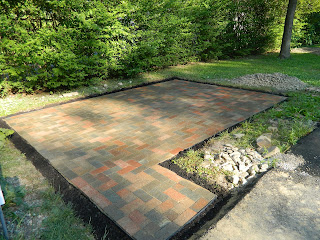 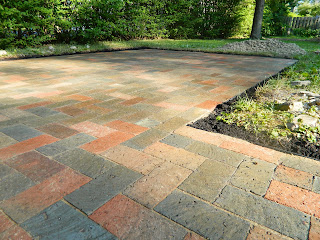 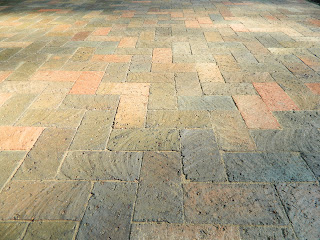 Look at that beautiful brick laying! Obviously, we need to get some grass growing around the edge (and the whole back yard really), but eventually it will all look as great as our new finished patio!

We did it! We completed our project in about a week - just in time because tomorrow we're off to Vancouver to embark on an Alaskan Cruise with Bryan's family!
Posted by Suzi at 5:32 PM