I've sort of been in a bloggers rut lately. Not for lack of cooking or running, but because there hasn't been anything new or noteworthy to write about. Running inside on a treadmill everyday is not exactly exciting news to write about, although I've been trying a few new workouts. Maybe I'll work those into a post soon. We've been busy eating some already-blogged-about favorites lately including the best lasagna in the world, spaghetti with braised kale, and African chicken peanut soup. A few other favorites have been considered like french onion soup, creamy leek and potato soup, and sweet potato pasta but I just haven't had time yet. Coming up tonight is another favorite: falafel feast!!!

Today though, I finally have something new to post! Last week, I got to go to one of my favorite Asian markets in Chicago. I don't go that often because it's not near our place at all. I took the Red Line train about 45 minutes and got out at Argyle, right in the middle of the Asian neighborhoods. The second I got out of the train, I could smell delicious Asian food. There are so many cool little shops and family owned restaurants around this area that I could have wandered around them for hours! Tai Nam is my favorite market in this area and it's just around the corner from the train stop. It's large, clean and has tons of selection!! However, nothing is in English - I love it!! You can buy all sorts of ingredients in regular or bulk restaurant sizes and they are CHEAP!!! I bought huge containers of yellow and red curry paste for $3.75 and a huge container of red chili flakes for $3. They also have a ginormous selection of Asian noodles, most of which are less than $0.75 per package. They have isles filled with interesting candies, snacks and canned goods that I've never seen before. They also have live crab and lobster as well as a large selection of fresh fish. They even have chicken feet. I filled up my basket to the rim and could barely lift it by the end of my shopping, and it only cost about $20. WOW! I seriously love coming up here!

Finally, I had some time last night to create something new. It was a simple Thai Peanut Chicken dish. 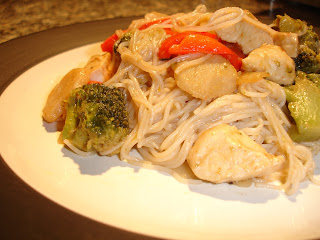 Basically, I just sauteed chicken with broccoli, onion, red pepper and water chestnuts in Thai Peanut sauce until the chicken was done and served with the vermicelli rice noodles from the market. It was so simple and incredibly delicious!!
Posted by Suzi at 11:03 AM