Blogging has really taken a back seat lately. I apologize. It's due to multiple things:
1. Having an old man computer that barely works and shuts down on me without notice even when the battery is plugged in. We're holding out on buying me a new mac laptop because Apple is suppose to release the new operating system in July 2011 - any day now Apple, it would be much appreciated.
2. Having a broken camera that takes pictures but I have no idea what I'm taking a picture of because the screen doesn't work. Oh yeah, btw, I've been operating with this broken camera since January. It's not ideal, but it still works so I can't complain too much. A camera is just not on the top of the "things we NEED to buy" list right now. Hopefully it will be soon though.
3. Being a temporarily single wife and not cooking that much now that I'm cooking for one. I'll still try to mix other posts in so that I'm still blogging and when a food post makes it on the blog, you know it's a good one!

Today's training called for 10 miles. I could not have gotten up early enough for this run not to be deadly hot. Seriously, it was only one degree cooler at 6am than 7am, so I slept the extra hour and knew it would be a scorcher. And it was! It's so hard running a long distance when the sun is beating down on you, with no shade, and no breeze. Chicago is called the windy city, but there was no breeze this morning until I got to the turn around point where I got to enjoy it for about a mile total. Gross. I even ditched my running tank top about 2 miles in (I just tucked it into the vertical part on the back of my sports bra) and was just dripping the entire time. Needless to say, I stopped for water about 20+ times which I'm sure added 10 minutes or more to my time. There were actual lines at some water fountains and I did not even care! I knew it was more important to stop and hydrate a even a little rather than risk overheating or getting dehydrated. 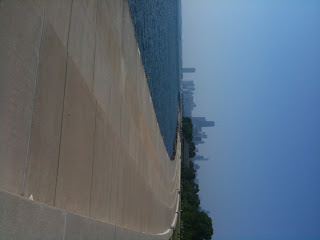 The view of where I ran from this morning. I started downtown and made my way up the lake shore. I always love the turning around point and seeing how far the city looks! But then I realize I have to run back. Ha! At least my legs felt good today! Yesterday's 7 mile run was not very fun at all.
I ran the same route as my other 10 miler in Chicago and had no major aches or pains again. That's a good sign!!

This afternoon, I had the opportunity to hang out with some great girl friends at a pool located at one of their condo buildings. It was simply amazing to relax, tan a bit and have some great girly chit chat all afternoon! Love you guys!
Posted by Suzi at 9:34 PM