Yes, that's single wife. Still married, but single for the next 2 months. Bryan is in Minneapolis doing a rotation and in August he'll be in Cleveland for another. We were in Minneapolis for the 4th of July weekend and it was very weird driving back to Chicago by myself. I had a very hard time sleeping all week, but luckily our cuddly Dimitri kept me company :) I'm very excited for this week - I'm going to visit Bryan (and friends and family of course) in Minneapolis for a VERY long weekend. It's much needed. I can't imagine how I'm going to hold out for another 6 weeks after next week!

We've only been apart for a week at this point, but Bryan and I have noticed that we function together very well. Neither of us really needs alone time apart from the other. I'm pretty introverted, and I thought I would eventually want some time to myself, but I've found that I literally crave spending time with him, and don't need much time to myself that is apart from him. We definitely have times where we both have a lot to do and need to be productive, but we do it well together at the same time. We are very schedule oriented, so we can plan a whole day and be very productive and lazy at the same time if we set times aside to do both! It just works well for us.

I've been keeping busy while I'm here in Chicago. Working as usual, training for the half and full marathon, and hanging out with friends. I sort of feel like my life has been more busy than usual, so I'm excited for some low-key time in Minnesota.

Oh yeah, and what else did I do while my husband was away? I cut my hair. Like chopped it off! If you know me, you know that I've had long hair (roughly to my elbows) for most of my life. There have been a few shorter do's, but I've primarily had long hair. I really do love it long, and it's so easy to maintain, it just works well for me. But with all the running I've been doing, I've gotten a little sick of my long, wet, heavy, floppy pony tail that sticks to my shoulder blades. So, I thought about it for a long time - probably a couple of months - and on Saturday I did it! And I do not regret it! It didn't even take me long to get used to. I love it!

This is a crappy shot, but at least it gives you an idea. What do you think? It's cuter in person, I think :) 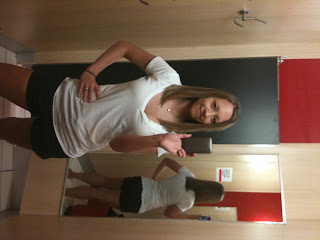